Saturday was a busy day for Shanballymore Juvenile club as we fielded three teams. First our under 6 players travelled to Castletownroche to take part in a challenge game. Our under 8’s were in Fermoy in the Rebel Og Monster Blitz, and finally our under 10’s travelled to Churchtown to compete in the hurling league. This shows the great work and dedication being put in by mangers of these teams as well as club officers for putting the time and effort required into the under age section of the club. 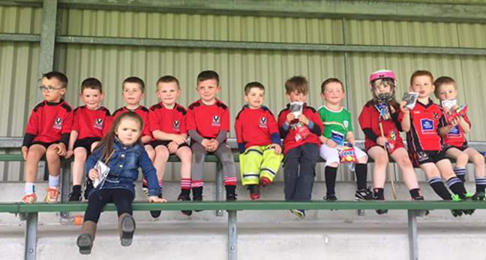 This was our second outing of the year. We made the short trip to Castletownroche with a large number of players, 12 in total. Credit to Brian Sheedy (manager) and his backroom team for fielding such numbers at this age level. With both clubs having big numbers it was decided it be best to divide the players into two teams so all players would have more game time and space to help to develop their skills. All players from the two clubs put on some great entertainment for the large group of supports. There was some brilliant individual displays from both teams and some of these players really caught the eye for future stars of their respective clubs. Many thanks to Castletownroche for their hospitality and we hope to return the favour in the near future.

Our under 8’s traveled to Fermoy to compete in the Monster Blitz. This consisted of playing three games, In the first game we played Bride Rovers Luke, Will and Niall really playing well and are improving every time they take to the field. In the second game we played Ballyhooley. This was a really enjoyable game with Rory, Eoin and Dawn really playing well against a tough Ballyhooley team. In the third and final match we played Ballygiblin team. Indya and Coaimhe worked hard with some very good displays and skills.

Also on Saturday we fielded our third team of the day when we played Granard Gaels in the under 10 hurling league. Our under 10 team played really well and matched the efforts that our under 6’s and 8’s had displayed earlier on in the day. We started the brighter with some great individual and team play that had us in control for most of the first half period. Credit must also go to Granard Gaels who approaching half time really put it up to use and had us under pressure before the referee blew the whistle for the change over. Playing into a slight wind for the second, we knew we would have to up our performance from the first half, this lead to some fine hooking and blocking all over the field as well as some brilliant point scoring. Granard Gaels also played some great hurling which had both teams trading score for score. With the minimum between the sides throughout the second half and the final whistle fast approach both teams tried tirelessly to get the winning score. However no team managed to find the posts and the game ended in  a draw. Well done to both team teams for a fine display of hurling. Best on the day were  Jack Twomey, Lorcan Murray and Aine Burke.

St Dominics Cul Camps will take place this year on the 26th – 29th July in Glanworth. Further details to follow.

Shanballymore Juvenile club would like to wish Luke Twomey a speedy recover after he sustained a nasty injury in an accidental and freak challenge on Saturday.