Shanballymore have had a number of outstanding players in the past, many of whom played for our divisional side Avondhu, with quiet a number playing  for the Cork team.

Brian lined out for the Cork under 14’s when they won the prestigous Tony Forristal tournament in Waterford in 2008. Most recently Brian was the winning captain of a Cork U16 team. This lead to Brian being awarded with the Christy Ring Trophy in 2010 for Best under 16 Hurling in Cork County (Previous winners of this significant award include Joe Deane, Diarmiud O’Sullivan, Tony Sullivan)

At a fantastic event at Rochestownpark hotel on Thursday the 24th of March 2015, Brian O’Reilly Shanballymore Captain for 2015 picked up the very prestigous 96&C103fm Rochestownpark Hotel Cork GAA February Awards winner on the back of a hugely Successful 2015 Season for Shanballymore culminating in Munster final success in February.

Jonathon wore the Cork jersey at underage level in 1999. Jonathon went on to win a county medal with Avondhu in the same year.

James played with Wexford U21’s and Seniors and Avondhu Seniors in the same year that he won a North Cork Hurling Championship Winners medal with Shanballymore.

James Purcell in action for Wexford

James Purcell in action for Wexford

Tom played Junior Football with Cork and must be considered very unlucky not to have represented the County in one or more grades of Hurling.

Donie played Minor and U-21 Hurling and winning an U-21 All-Ireland medal in 1983. He also played Senior Hurling with Cork, winning a Tournament for the opening of the Jack Barrett Memorial Park. 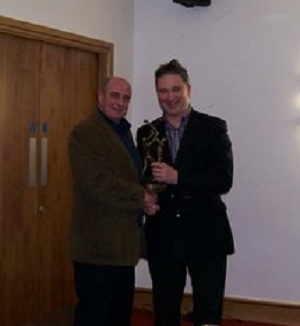 Conor played Minor Football, U-21 and Junior Hurling. Conor collected and All-Ireland Minor medal in 1981 on the same team as Tom Mannix. Conor also won a Senior County medal with Avondhu and was named man of the Match in the final against Imokilly the same year 1996.

Pat has the distinction of playing in six Harty Cup Finals with St. Colmans College Fermoy, winning in 1948 and 1949. He also played Junior Championship Hurling with Cork and lined out with the Cork Senior Hurlers in National League League fixtures. Pat also proved to be a most worthy and deserving recipient of our Hall of Fame Award in 1993.

Jim Burke won an All Ireland junior hurling medal with  Cork in 1928.

Jim won a Junior hurling All Ireland in 1912.

Early records show that the first Shanballymore player to play in an All-Ireland Final was the late Dinny Daly when he played with Redmond’s when they were defeated in the All-Ireland of 1902 by London-Irish.