At a fantastic event at Rochestownpark hotel on Thursday the 24th of March 2015, Brian O’Reilly Shanballymore Captain for 2015 picked up the very prestigous February award on the back of a hugely Successful 2015 Season for Shanballymore culminating in Munster final success in February. 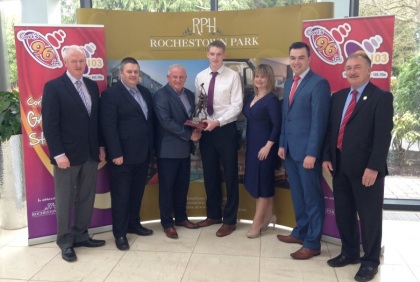 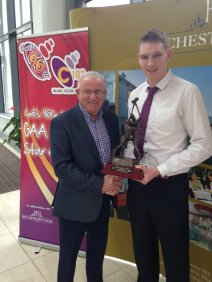 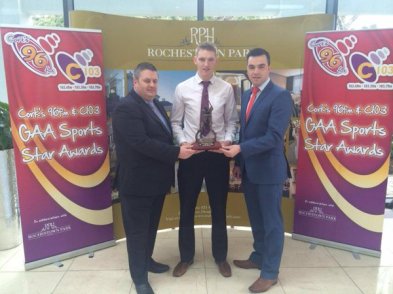 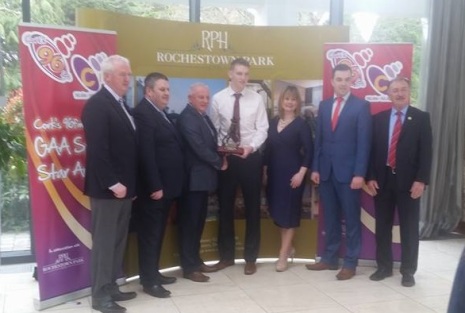 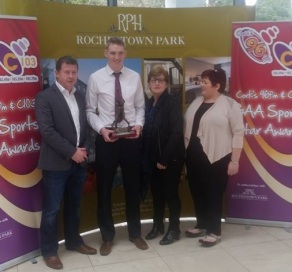 There was delight in both the Shanballymore and Mill Rovers GAA clubs this week as Brian O’Reilly was selected as the 2010 winner of the prestigious Christy Ring Cup award.

The Corn Christoir Ó Rinn prize is handed out to the most accomplished hurler playing in under 16A competition in the county and has been in existence since 1979.

To put the enormity of Brian’s feat into perspective former winners of the award include Brian Corcoran (1989), Joe Deane (1993), Ben O’Connor (1995), Tomas O’Leary (1999) and Patrick Horgan (2004) all men that have represented both county, province and country with the highest distinction so Brian is in good company. Indeed Brian is only the 6th man from the Avondhu division to be selected as winner.

He received the award on Friday last the 28th at a special dinner held in the Rochestown Park hotel. Proud parents Neilus and Helen were joined in attendance by County Board chairmen Jerry O’Sullivan and secretary Frank Murphy to see Brian pick up his prize from outgoing Cork GAA Bord Na n-Óg chairmen Tony O’Mahony.

Speaking on the award Shanballymore GAA chairman Richard Burke was thrilled for Brian and his family. “Congratulations to Brian on the wonderful recognition of being chosen Cork County Hurler of the year at U16 level for 2010, it is a great honour for himself, his family Neilie, Helen and Colman and for all involved in Shanballymore and Mill Rovers GAA clubs.

“When you see some of the previous winners of this award, players of the ilk of Tony O’Sullivan, Brian Corcoran, Joe Deane and Ben O’Connor it puts the significance of this achievement into perspective. It can sometimes be difficult for players from smaller clubs to get the recognition and opportunity they deserve but Brian is a stand out player and this award was won on merit on the back of a string of man of the match performances incorporating some super scores during last years campaign.

“With the types of performances that Brian has put in last year in the Cork jersey and with this prestigious recognition by the County Board of his achievement to date and his potential for the future he must unquestionably be a part of John Considine and Seanie McGrath’s plans for 2011. We look forward in Shanballymore GAA club to supporting Brian in his blossoming inter-county career in the years ahead.”

Chairman of Mill Rovers John Barry was also quick to add his congratulations. “All at Mill Rovers would like to congratulate Brian on his award. A proud day for his parents and brother who are a huge GAA family in Shanballymore.

“Brian is a very talented player who has worked extremely hard on his game and he has a very bright future ahead and we look forward to seeing him progress.

Everyone involved in the Mill Rovers club is proud of him.”

Brian has represented Cork and Avondhu in hurling at U14, 15 and 16 levels. In fact he was captain of his county at under 15 and 16. He delivered man of the match performances in both attack and defence for Cork over that period such is his versatility as a player.

He captained the Cork U16 team that won the All-Ireland shield competition held in Thurles last year. Playing in wins over Waterford, Clare and scoring an inspired winning goal with a couple of minutes remaining to claim victory in the final over Limerick to lift the trophy.

Winning numerous medals down the years he counts his best accomplishments as the inter-county Tony Forristal tournament win in 2008 and his U14A Championship win with Mill Rovers in the same year.

He is hoping to be in both the Cork U17 and minor panels this calendar year and with that list of achievements it’s hard to see any reason why he shouldn’t be. He is also due to make his debut in the famous black and red of Shanballymore this season at Junior and U21 levels.

When asked about his award Brian humbly looked to thank all those that have helped him along the way. “I’d like to thank both the Mill Rovers and Shanballymore clubs, all the coaches, selectors and mentors at club, divisional and inter-county level that have helped me. All the teammates in those teams I have played with and of course my family”.

There is no doubt that Brian is a fantastic talent and a totally deserving recipient of one of the most sought after awards in Cork hurling.