On Friday 10th February we came together in Springfort Hall Hotel to celebrate the achievements of the club over the course of the past 2 years and also to remember the North Cork winning teams of 1996/1997. A huge crowd of players past and present, family and friends was in attendance on the night as we celebrated the Munster and All Ireland Junior B success of least year, continuing on from North Cork and County successes in 2015. Guests of honour on the night included Barry Aherne chair of Avondhu GAA, Tracey Kennedy Vice chair of Cork GAA board, Seán Og O Hailpin and a delegation from Kileedy GAA club who organise the Junior B All Ireland series.

Club chairman Richie Burke welcomed the crowd on the night with a brief recap of what happened on the road to All Ireland success. He also reflected on the decision to honour the teams of 1996/1997 for the 20th anniversary of Shanballymore winning back to back Junior A North Cork titles. Pat Walsh along with the other selectors from 1996/97 then presented a framed team photo to the members of those teams in attendance on the night. Richie acknowledged and thanked the members of Kileedy GAA club in attendance for organising and running the Junior B All Ireland series.

Our trainer Jim Sullivan spoke briefly on the commitment put in by the team over the last 2 years, also acknowledging the sacrifices made by partners, wives and families of the players and thanking them. Sean Og then presented players with their medals while Jim called all the players in turn. The medals in question were beautifully presented in a frame put together by Padraig  and Zoe Fitzgerald with the Shanballymore crest, players name and the date of winning the medal. For this we owe Padraig and Zoe a huge thanks as these will be fantastic momentos for players in years to come. Sean Og spoke briefly on the importance of an All Ireland title, from Junior B right up to Senior level. 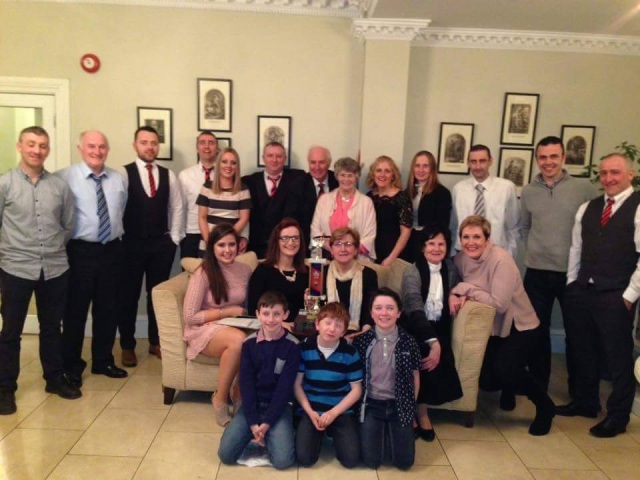 The final item on the agenda for the night was the announcement of the Hall of Fame recipient. This years recipient was Noreen Burke who is without doubt a most worthy recipient. She has given countless years of service to the club as Secretary, 1st aider, organiser of the Cork GAA raffle and also handles the clubs allocation of tickets for Cork games among countless other services to the club. Her family has also gone on to play a huge part in Shanballymore GAA. Congratulations once more to Noreen and all the Burke family on your induction to the hall of fame, it is truly well deserved.

This entry was posted in Club Reports. Bookmark the permalink.