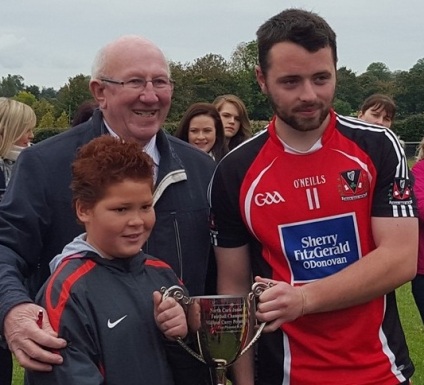 So far 2015 has been an amazing year for Shanballymore GAA club with the county junior b hurling title won in that famous night in Pairc Ui Rinn in July and weeks later we captured the north Cork junior b hurling  when we had a hard fought win over Killavullan.

After this we went on to contest the junior b football championship and with very little football done since our defeat in the county football championship back in May we didnt think we would have any impact on this year’s championship. However that all changed with an outstanding win against last year’s champions Ballyhooly, when we played them in Mourneabbey a few weeks ago. We then faced a tough physical Millford side in the semifinal and with a narrow one point lead at half time we put in a solid second half performance and ran out convincing winners in the end.

We had qualified for our first junior b football final in three years and faced a Grange team that were playing a third football final of the year after their great runs in the county championship and county league. We knew this was going to be a battle right from the start as Grange are always a tough team to play against..

We started the game like a whirlwind and put Grange under pressure from the off and had the first score when the powerfull Eoin McHugh went through the center and slotted over an excellent point. This was followed by quick points from Vincent Burke and Eoin O’Regan.

Grange to their credit had us under pressure at times and scored a point from a tight angle in the tenth minute but with our inside back line of Brian Sheedy, Paudie Fitzgerald and Jonathan Dennehy totally dominating their danger men they found scores hard to come by. Behind them Dylan was as always alert to any breaking ball and cleared his lines well.

Jamie Sheedy added our fourth point from play after Robert McHugh and Sean Lynch combined to set him up for a well taken score, Grange answered with a free after twenty minutes but this was all they would get in for in the first half as we shut up shop for the remainder of the half. With Grange working hard, our forwards had to work very hard for scores but they deserve great credit for the patience they showed when they were often surrounded by the numbers in defence.

Brian O’Reilly was next on the score sheet when he got in for a great point after he was set up by the excellent Paul Burke and this was followed by two Eoin O’Regan points from a free and play to put us five up with half time approaching. Grange tried hard to get scores but they were met with a solid half back line where Robert McHugh, Colman O’Reilly and between them Haulie Burke were outstanding all through. All three raided down field at every opportunity to add pressure to the Grange rearguard.

The last score of the first half was scored by the hard working Alan Sheedy when he turned inside two Grange defenders and pointed from the 21 yard line, this gave us a healthy lead at halftime 0-8 to 0-2 and we knew that our fitness would not see us let up in the second half.

Thankfully we didn’t let up and kicked off the second half with some excellent scores with the first coming from Vincent Burke who seems to be playing his best football in years and this was followed by two quick fire scores from Brian O’Reilly who was now working very hard around the forward line.

Grange got their third point when they had a rare attack but we were now in total control with twenty minutes left in the game, our midfield paring of Sean Lynch and Eoin McHugh were outstanding throughout the game and some of their high fielding was a joy to watch as they won the hard fought battle in the middle of the field.

Brian O’Reilly got in for his fourth point of the game when he pointed a rebound from close range after Paul Burkes effort was denied by the Grange defender, Grange got a fourth point from a free but we answered immediately when some excellent link up play led to Jerome Fitzgerald setting up Alan Sheedy to point from distance to give us a commanding lead 0-14 to 0-4 with ten minutes remaining.

We had the misfortune of losing the excellent Jamie Sheedy when he received a second yellow card for a foul on the Grange attacker but this didn’t see us let up and with fresh legs coming on from our very strong bench we were able to keep up the momentum and keep running at Grange. Haulie had another point for us when he ventured forward and slotted over from distance.

Grange had their fifth and last point with five minutes remaining and we now had the winning line in our sights and went on the attack again and when Richard Hallinan set up Eamon Fitzgerald he saw his effort drift just wide of the post. We were now raiding down on the Grange goal at every opportunity and got the last score of the game when Vincent Burke and Jerome Fitzgerald combined to set up Kenneth Barry and he pointed from close range.

Grange had one last attack with a minute remaining but this was cut out by the alert Richard Burke who snuffed out the danger and cleared the ball down field, shortly after this referee Aidan Hyland blew the full time whistle and we had claimed our third championship title of the year. This win was a great achievement for this group of players and the whole club as it adds to the great year we are already having.

After the game in front of a large gathering of loyal Shanballymore supporters our captian Eoin O’Regan was presented with the Micheal Curry memorial cup by north Cork board representative John O’Donnell, Eoin thanked all the supporter’s for turning out again and getting behind the team in this great victory. He thanked the members of the Curry family for putting up the cup and the sponsor’s Walshs pharmacy Fermoy, he also had special praise for Glanworth for the excellent condition of the playing field and the referee and his official’s.

After all this the man of the match award was announced and this went to Brian O’Reilly who was brilliant all through and also added four points from play, this was Brians third man of the match award of the year as he was also nominated for his feat in the county hurling final and the north cork hurling final, well done to Brian and his family as this is a great achievement for them.

This brings a close to our football for the year and we now go back to concentrating full time on hurling  and I’m sure this group of players will go all out to win all the competitions they are still involved in.

A special word of thanks must go to the three football selectors Kenneth Barry, Paul Ryan and Dave Twomey for all the hard work they put in this year and also to the club officers for getting behind the players in the pursuit for football glory.